Following the Belgian Revolution of 1830, Belgium seceded from the Netherlands and became its own country in Western Europe with three national languages: Dutch, French, and German. Now known for their chocolate, beer, and fries, the fifteen cities of Belgium can show you the best of Europe.

Accessible by international airlines and trains, Belgium is the ideal holiday destination to spend with your family. In this post, you will learn about the most beautiful cities in Belgium.

How Many Cities Does Belgium Have?

There are 15 primary cities in Belgium which make up most of the country’s population of 11.59 million.

This is a list of cities in Belgium from most to least populous. You can find more details on each below.

A Closer Look at the Cities in Belgium

Belgium is home to rich history, cultures, and traditions for you to experience. Take a closer look at the best places in Belgium to learn about the different cities and what they each have to offer so you can plan your perfect holiday!

Brussels – The Capital City of Belgium

Bruxelles-Brussels, the capital of Belgium, is the most populated city in the country. It is home to the European Union Headquarters, which visitors can access for a tour through the European Economic and Social Committee.

You can embark on tour bus rides to see other Brussels attractions, including Atomium and the Grand Palace, or sit down for a traditional waffle breakfast at an English and French-speaking cafe.

Alongside Ostend, Brussels is one of the best Halloween destinations in Europe if you’re travelling in the fall!

Although best known for its winter Christmas markets, Liège is another Belgian city to visit all year round. La Boverie is the finest art museum in the country, built from the remains of the Palais des beaux-arts de Liège, and hosts special exhibitions throughout the year.

A green city nestled in an industrial zone, Liège is situated on the Meuse River and is perfect for river cruises and other water activities.

One of the top cities in Belgium, Antwerp is the second largest port in Europe and is known for its international diamond trade. Home to the beautiful Cathedral of Our Lady and the Red Star Line Museum, Antwerp is a must-see for your Belgian vacation.

Antwerp is a hub for traditional, delicious Dutch food. You can find waffles, fries, croquettes, and beer at almost any restaurant in the city.

Despite its large population and abundance of activities for visitors, Ghent is a compact, walkable city northwest of the Brussels capital in Flanders. Within Ghent, you can explore the Graslei and Korenlei medieval Cathedrals by canal cruise.

The region of Flanders as a whole is accessible by train. Important historical sites to visit include the Flanders Field American Cemetery and the Basilica of the Holy Blood.

The perfect holiday activity for children and parents alike is Charleroi’s Escape Game, a search across the city for Charleroi’s best attractions. The self-guided tour can make for a full day of fun for a group of six people at minimal cost.

From the Museum of Industry to a show at La Ruche Theatre, your visit to Charleroi will be packed with culturally rich experiences.

The highlights of Schaerbeek for families are cultural museums, including Train World and the Chocolate Museum Experience.

Once you have eaten as much chocolate as possible, you can stop at the Belgian Beer Museum for a taste of Belgian history and beer!

One of the Brussels capital municipalities, Anderlecht, is a prime destination for short visits and day trips. You can see a monument to Don Quixote and Sancho Panza or take a well-earned tour of the Cantillon Brewery.

In terms of dedicated tourist attractions, Bruges is one of the next best places in Belgium for visitors.

Learn about the country’s history from the underground Torture Museum or take a VR tour of the city at Bruges Hall. You can also visit the chocolate museum for bottomless chocolate or the “pomme frites” museum for live demonstrations.

Dubbed the most photogenic city in the world, Bruges is one of the best cities to visit in Belgium.

The Citadel of Namur is one of the most impressive landmarks in Europe. This city was home to the Counts of Namur in the Middle Ages and has since been regenerated into an educational site. You can take guided tours and visit museums to learn about the history of the greater Wallonia region in Belgium.

Close to Namur along the Meuse is Dinant, a small town with just as much to offer as larger cities. Namur is a central hub for accessing other regions of Belgium.

One of the next largest cities in Belgium, Leuven is home to Garden Kruidtuin, luscious botanical gardens open to visitors interested in plant conservation or, simply, an escape to nature in an otherwise bustling city.

The M Leuven is another famous attraction in the heart of the city. This modern art museum with exhibits on art history in Belgium and across Europe has been described as a perfect outing for families with young children!

To explore local history, you can enter Mons City Hall, the Saint Wiltrude Collegiate Church, or stop by the Mons Memorial Museum, all unmissable destinations in Mons, the capital of the Hainaut province.

Soon after Easter, Mons celebrates a unique eight-day festival called Lumeçon which originated in the 14th Century. If you visit during the right time of year, Mons could give you a once-in-a-lifetime experience.

Located between Brussels, Antwerp, and Ghent, Mechelen is an easy city to access for a day trip. The vast fields surrounding Mechelen, which produce some of Europe’s best vegetables, can be seen from a hike to the top of St Rumbold’s Tower.

You can visit Mechelen Muurt, a street close to the city centre known for wall art, or stop at the numerous market stalls selling small, locally-made trinkets and fresh produce.

Similar to Leuven’s main attraction, Hasselt’s Japanese Gardens are an exquisite outing for families to engage in worldly history.

Alongside this, you can visit the Herkenrode Abbey and monastery or the Cathedral St Quintinus to get a taste of religious traditions in Europe.

Particularly for families with young children, Tournai is the best city to visit in Belgium. With numerous unique experiences, including the Folklore Museum, Ecopark Adventures, and Jungle City Amusement Park, there are endless opportunities to make fun memories together.

Tournai is also home to some of the best theme parks in Europe! It is well worth your visit.

Ninove’s Chocolate Museum Experience is unlike any other in Belgium. You’ll enter the museum’s exhibition and demonstration rooms for minimal costs to watch a professional chocolate maker mix, pour, and mould the best chocolate in Europe.

Especially for kids, this is the epitome of a Belgian vacation!

What is the richest city in Belgium?

The richest city in Belgium is Antwerp, with a nominal gross domestic product of over 92 billion euros. Brussels is second with a GDP of 87 billion euros.

What is Belgium’s most popular city?

The most visited city in Belgium is Brussels. Businesses and government officials frequent the city for work, and tourists visit for its nightlife and shopping districts.

What are the 3 major cities in Belgium?

The three major cities in Belgium are Brussels, Antwerp, and Liège.

Plan Your Trip to Belgium

View Places to Stay in Belgium >>>

Or find accomodation on Vrbo >>

Find somewhere to store your luggage when you arrive >>> 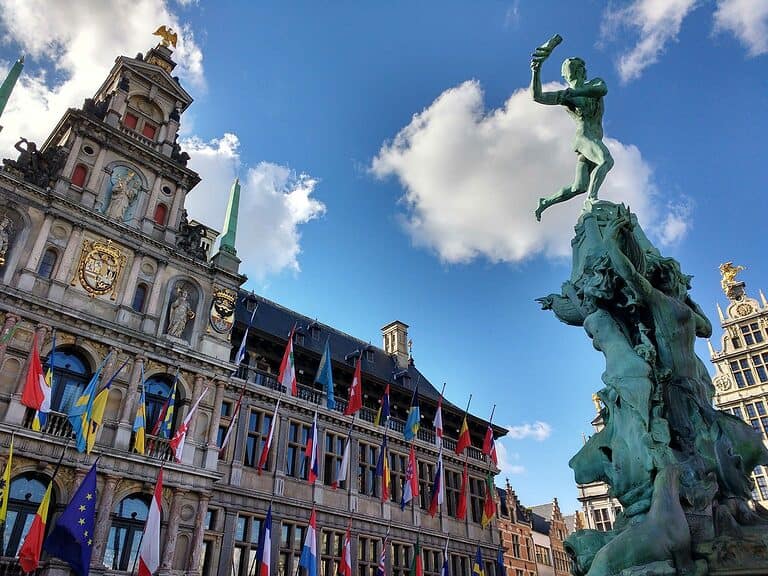 Continue Reading An Antwerp City Break with Kids: Your 2023 Guide